As a fun exercise, I decided that I’ll share with you all the way that I come up with a picture book story, to writing the draft, to going through editing, to then looking around for publishers and agents where it could possibly be a fit.

Lots of people share a lot of ideas about the “writing process”, but I thought it would be interesting to actually show my work in progress as I chug along.  Hopefully this will be as interesting for you as it is for me.  Who knows, I might even get a neat little story out of this.

So let’s start with CONCEPTUALIZATION

In my previous post I talked about Rory’s Story Dice and how that is a great way to get the creative juices flowing.  But of course, like anything else, there is no one way to “discover a story” that rests inside your mind.  Many times, life will also just kind of hit you over the head and say, “THERE!  THERE is a story!”

And such a thing happened to me today.

We live right near a civil war battlefield and my wife and I took the kids for a walk through it this morning.  Right near the entrance of the walking path, there was part of an old brick sidewalk. Most of it was covered up with asphalt, but there was some you could see.  It was only about three feet in diameter and kind of oval shaped.  I’m not sure why the park people decided to cover up the brickwork, but it seemed like they did so a long time ago.  Not that this mattered to my daughter.

Ella said, “Look!  A clue!  It’s a brick monster’s footprint!”  And she wouldn’t stop talking about our search for the brick monster.  As we walked through the park she would run over and look at trees, rocks on the ground, or even dead bugs–all in the name of discovering this brick monster.

When it was time for us to go home, I asked if she wanted to draw a picture of the brick monster.  She did and this is what she drew (which is now taped to our front door–should the brick monster show up) 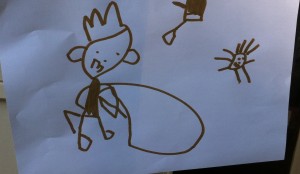 Which is not exactly what I thought a brick monster would look like.  I kind of pictured the Thing from the Fantastic Four.  But of course, we’ve been reading Korgi (by Christian Slade [which you should go buy!]) and in Book 3, the bad guys look like this:

Anyway, Ella and I kept up this brick monster hunt for most of the morning.  I hadn’t been thinking about picture books in particular; I just wanted to enjoy her creative play for as long as possible.  It felt like one of those mornings where life was great as a dad.

We were wandering around the backyard.  She had a plastic baseball bat.  I had my cup of coffee.  When all of a sudden, we walked out of the shade and it got a bit hot.

I found this incredibly funny.  Here we are, exploring the backyard for the nefarious brick monster, she’s wielding a magical bat (dipped in the “power water” from the purple dinosaur kiddie pool), and a bit Georgia heat caused the entire story to come crumbling down.

That, to me, had the rumblings of a story in it.  So much so, I couldn’t stop thinking about it.  How kids play.  How their imaginations work.  How kids can swim in and out of these amazing fantasy worlds and then run to their parents when they need a snack.

It seems like a pretty fun idea to play around with.

So with play time having come and gone, here’s what I came up with for my story:

1. The main “gimmick” is going to be the interplay between a grand adventure and small events that bring everything back to a mundane reality.

I have no idea how the story is going to end.  I’m not really sure what the events will be.   I’m not even sure if I’ll go for a sweet funny story or something just a bit bizarre/zany.

That said, my mind is now rolling ideas around with my concept.  In my next post, I’m going to take my 2 “knowns” and put together the first draft.  After that, I’ll be taking that draft to my critique group to see what they think.  Then we’ll head into rewriting (and rewriting and rewriting).